The G&M entire range has undergone a rather dramatic facelift.  Always a firm favourite with the whisky buffs, G&M always means quality, I have never had a whisky from G&M I didn’t like.  No matter which distillery, no matter which age, you cannot deny that G&M means quality and consistency that many other bottlers can only dream of, with experience that spans more than 120 years, they have built up an impressive range of casks, contacts, and one hell of a liquid library! 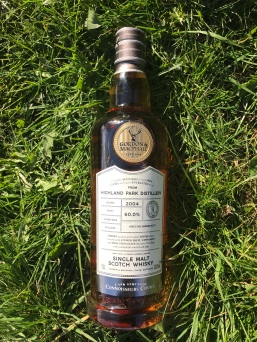 This is one of the first offerings from the new range, it’s a Highland Park, a much sought-after distillery with quite a fan base, it’s 13 years old and hails from a first fill sherry butt, a single cask offering of 655 bottles.  It’s priced at around £90 across the board, although we did see it at £85.

Right, you’ve got the basics, lets see what G&M have to say about it.

For more than 120 years Gordon & MacPhail has pursued a singular path to become the master of single malt Scotch whisky maturation.

Passion for single malt Scotch whisky has been at the heart of our family business for four generations. This range is an ever-changing collection of unique perspectives on distilleries’ own bottlings, non-chill-filtered single cask and small batch expressions bottled at cask strength and exceptional one-offs.

For the malt whisky explorer, it promises a journey of discovery through different flavours, finishes, strengths and vintages. 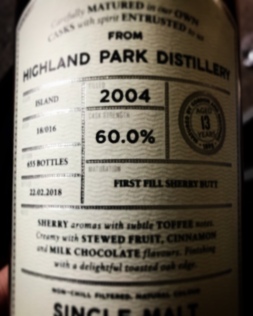 Finish: Medium with a delightful and lingering wood smoke edge.

Some newly melted milk chocolate is the first thing you notice.  This is closely followed by some berry fruits, almost blackberry and raspberry jam like.  These die down and a fresh feeling can be found, clean, sharp, like the wind on your face of a fresh breeze.  This is all cloaked by the red hot mist of the unmistakable ABV of this whisky.

The milk chocolate from the nose is there, along with the berry jams.  As these die away your tongue starts to tingle as spices dance around.  Not peppery thought, more like popping candy, jumping and popping on the tongue.  You can tell this isn’t the standard 40% but it isn’t as sharp as the nose first indicated.

The finish is middling, not overly long, but enough to know you have had a nice dram.

This is a highly sherry influenced whisky, which isn’t always to my taste, but if I was to go for a sherried whisky, this is the sort I like.  Lovely berry jams all the way through and the right amount of spice makes this a whisky wort returning to.  A great introduction to the new CC range.

The price point of £85 may seem steep for a 13 year old single cask, but it is a sought after distillery and the ABV will play a part in that.  If you want my opinion, this is well worth buying.

Usually the first note is an easy thing to pick out, however that wasn’t the case here.  I was convinced that the first note was the robust earthiness of autumn leaves, then, that it was the sweet, creamy notes of warm melting milk chocolate, before deciding it was the sharp yet sweet notes of lemon zest, quickly becoming sweeter and more gentle, more dessert like.  Think lemon curd topped with meringue pieces that came to the fore.

The three flittered in and out tussling and jostling for first place.  Returning to the glass once more it was the earthiness of dew covered moss and crunchy autumn leaves turning to dust under foot, as the air, hanging heavy with mist encircles your face, both refreshing and musty all at once, which won out.   Not far behind  the sweet, dense, creamy milk chocolate started to make itself known, bringing a honey drizzled sweetness with a rich, chopped Brazil nut notes, and roasted chestnuts edge adding a grown up, savoury dimension.

Blood oranges with a dusting of icing sugar and just a hint of winter berries appear, with sticky brambles and damson, and a beautifully lively spiciness, with sweet dessert spices of nutmeg, cinnamon and five spice appearing first, followed up by a slight heat, like a dry rub on steak, meaty and yeasty, all paprika and peppercorns giving a prickle that dances around like the flames of a campfire, imparting a little smoke as it goes, giving a slight nod to the abv.

The berry fruits from the nose burst on to the plate, the rush of sweetness so great it makes your mouth water.  There’s blackberry and raspberry joined by wild strawberries, apricots, stewed plums and sticky dates.   Lemon marches in, cutting through the sweetness, sharper than it appeared on the nose, yet soon it takes a turn for the dessert trolley once again, with notes of lemon drizzle cakes, with a rich vanilla buttercream.

The orange is there from earlier on, with a rich, sticky, marmalade quality, with softer notes of mandarins lurking behind it.   Before it all becomes overrun by sweetness personified the spices and earthy notes from the nose combine, bringing it quite literally back down to earth.   Think digging fresh, damp soil in the garden, uprooting turnips and potatoes with a touch of the hessian sacks you will fill, and thick fishing nets, salty and damp, with just a touch of the sea.

The spices make this such a vibrant whisky, and they aren’t found on the back of the tongue where you would usually expect to find them, instead they dance on the very front of the tongue, tumbling and churning like waves crashing on the shore.

It is easy to dismiss this as a relatively short finish at first, however the spicy notes linger gently on the lips, making them tingle, like a kiss from a lover, making you smile long after the glass is empty.  The fruitiness from the berries is replaced by the sweet caress of milk chocolate and lemon meringue pie, fading out to a warm crepe suzette, those orange notes refusing to disappear, with just a touch of bitterness of chopped brazil nuts and polished mahogany.  Which takes this spritely, sweet, almost childlike dram, to sophisticated and grown up with just a hint of mischief.

It is beautifully put together, with notes that are strong enough to stand alone, yet are far better combining in a beautiful crescendo.   It starts out with the rich base notes of the earth, before middle notes of autumnal fruits and then high top notes of all things sweet and sing like the most beautiful melody.  Truly an orchestra of flavours.

The new look Connoisseurs Choice range is much like this, its grown up and sophisticated, no nonsense labelling tells you all you need to know and embossed coins and heavy bottle adds a touch of luxury.  The price is £90 and at first I struggled to decide if I thought it too steep, however quality will always out, and that it’s what G&M do so well.  Excellent spirit, fantastic casks with top quality wood and perfect maturation.    There’s a reason they have coined the #maturationexperts and I for one would not disagree with this self awarded accolade.

Buy this whisky, it’s from a popular distillery with a cult following and upon trying this, it’s easy to see why.

Scotch whisky maturation expert, Gordon & MacPhail, has announced the relaunch of its portfolio of single malt Scotch whiskies to continue strengthening the reputation of the brand globally.

The first range to relaunch, with a distinctive new look, will be ‘Connoisseurs Choice’, which marks its fiftieth anniversary this year.

Stephen Rankin is Director of Prestige and a fourth generation member of the Urquhart family, owners of Gordon & MacPhail. He said: “Gordon & MacPhail has a 122-year history of forging strong and lasting relationships with distillers across Scotland and our loyal consumers. With four generations of experience in the whisky industry, we have continually evolved, innovated, and grown.

“As we begin a new chapter, we are streamlining our portfolio to make it more accessible for our consumers, placing their desire for products with heritage, authenticity, and provenance at the heart of each range. We want to take malt whisky lovers on a journey that will help them explore beyond their usual whisky choices.

“Each whisky tells a story, not only about the distillery of origin and the casks maturing the spirit, but also about the time and patience devoted to nurturing each whisky to the pinnacle of its maturation potential. Many of the whiskies in our ranges have been tended by multiple generations of my family.”

The newly refreshed ‘Connoisseurs Choice’ was first pioneered in 1968 by George Urquhart, second generation of the family, at a time when very few whiskies were bottled as single malts.

Stephen continued: “When my grandfather launched ‘Connoisseurs Choice’, he was considered eccentric for taking such an innovative approach. This range provided an opportunity for whisky lovers to explore whiskies that had never previously been bottled as single malts. As a result, he is heralded as one of the pioneers of the single malt category.

“Our ‘Connoisseurs Choice’ range remains true to my grandfather’s vision and philosophy while placing a greater emphasis on small batch, single and multiple casks, bottled as vintages. We hope consumers will look forward to each limited release.”

The brand-new ‘Discovery’ range will follow in late spring; ‘Distillery Labels’ will launch in the summer, and new look ‘Private Collection’ range will be released in the autumn; the next ‘Generations’ unveiling is still to be revealed.

2018 marks the fiftieth anniversary of the “Connoisseurs Choice” range, the new range     launches now in Spring 2018. These will be small batch non-chillfiltered, single and multiple cask bottlings. The label will clearly state what vintage the whiskies are as well as having a   different colourway depending on the strength or wood finish. (46% – Gold Colourway, Cask    Strength – Grey Colourway and Wood Finish – Red Colourway).

Everybody needs a Whisky Corner in their life.