Christmas may be over for another year and presents for family and friends given and received but now is the time to spoil yourself.

You tell people you like whisky and you can be guaranteed to receive something whisky related as a gift, usually socks with a picture of a still on them, or one of the many books telling you how to drink whisky, or worse a bottle of a whisky liqueur! That sums up most people’s experience of Christmas presents, the giver’s heart is in the right place but they just do not understand the drink, how it makes you feel, how you need the right bottle for the right time. If only there was a holiday that you could treat yourself on, a day when you can uncork a whisky that you know you are going to enjoy. Well let me tell you about one such holiday, New Year’s Eve, or to pronounce it properly, Hogmanay!

This is the time for you to treat yourself, to open that special bottle, to charge your glass with something you will remember for the coming year, the special dram that you will toast loved ones with and remember those that are sadly no longer with us. The dram choice is yours but as we are only ever helpful here at The Corner then we thought we would share some suggestions with you.

The Chivas Regal 12 year old is well known to many people, a blended whisky that is a step up from your more standard fare. Rich and Fruity, bursting with honey and apples, this dram is perfect for the person who wants a whisky that slips down easily and also likes to watch their wallet.

This however is no ordinary 12 year old, as Chivas Regal has partnered with renowned luxury English luggage company Globe-Trotter to design an exclusive series of three collectibles. This 12 year old comes in a limited edition tin inspired by the tradition of applying stickers to luggage of destinations visited. These designs were hand-drawn by the British illustrator Andrew Davidson.

RRP £28.19 Available at Selfridges, The Whisky Exchange and The Whisky Shop

If a peated whisky is more your thing then a distillery you may not know all to well is the smallest on Islay, Kilchoman. Founded in 2005, they have been producing great quality whisky and have developed something of a cult following. Their entry level whisky is Machir Bay, named after a picturesque sandy beach overlooked by the Kilchoman Church just half a mile from the distillery. Machir Bay is a non age statement whisky (approx. 5 and 6 year old casks) that has been matured in both Bourbon and Sherry casks, giving it a well balanced mixture of tropical fruit, peat smoke and sweetness. If you like peated whisky, then this is one you have to try, you will not be disappointed.

RRP £39.99 Available from the distillery and most specialist whisky shops, including Master of Malt 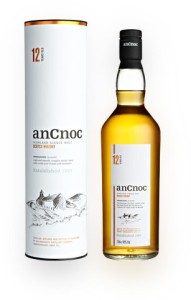 From Islay we travel north-east, up to the Highlands of Scotland and the picturesque village of Knock in Aberdeenshire. This village is home to Knockdhu distillery which produces the wonderful anCnoc whisky. The 12 year old is known the world over and a must have Highland malt for your whisky shelf. Light, yet complex, smooth, yet challenging, this is not your standard entry level malt. Very aromatic with honey and lemon on the nose and the palate is where the fruit comes out to play, before ending with a long finish. A great value whisky.

RRP £34.99 Available from the distillery and most specialist whisky shops, including The Green Welly Stop 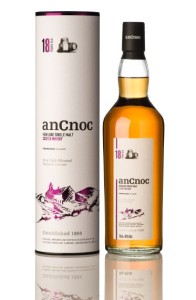 Staying at the Knockdhu distillery, this offering is more suited to those willing to spend a bit more on a Hogmanay dram. The 18 year old is matured in both Bourbon and Sherry casks before being blended masterfully together to produce this wonderful whisky. Gentle spices and dried fruit sweetness are the delights available on the nose, with the palate conjuring up a full bodied, bold and intense whisky with a finish that moves seamlessly from peppery hot to smooth and sweet. If you have a bigger budget and want an older whisky, then this is the one to go for.

RRP £73.99 Available from the distillery and most specialist whisky shops, including The Whisky Exchange

Aultmore distillery is one that was used for making whisky for blends, no single malts were released from here until 2004, when a 12 year old was introduced. Since the takeover by Bacardi, Aultmore is one of 5 distilleries owned by the group and in 2014 has seen new single malts hit the high street as part of “The Last Great Malts” series. This 25 year old is the pinnacle of the Aultmore releases. Packed full of baked fruit, this is one dram that is said to be not afraid to show it’s age. If you want a dram that your guests will remember then this is the one to go for. By no means inexpensive, but you are paying for a piece of history and a malt that was distilled when house music was tearing up the charts.

RRP £296 Available from specialist whisky shops, including The Whisky Exchange and Master of Malt

Back to Islay for this devil of a dram, and the distillery known as Bowmore. The Devil’s Cask series was well received when it was released and soon sold out, the first 2 batches being 10 years old and priced at approximately £60. The 3rd and final release in the series has caused quite a furore and certainly made a name for itself but not in a good way. The reason? Instead of being labelled as a 10 year old, it is know a non age statement whisky, this is a hot topic in the whisky world at the moment with people very vocal against the somewhat prolific way in which each new whisky seems to want to remain ageless. The second reason is the price, as mentioned before, the previous releases were approx. £60, this one however is £190, more than 3x the Batch 1 price. Anybody who knows anything about whisky would have guessed that the price of Batch 3 was going to be higher than Batches 1 & 2, they had sold out quickly and were going for crazy money on the secondary market, however nobody saw this coming. To play Devil’s Advocate for a moment, I can understand the price hike, Bowmore maybe want to cash in a bit on the secondary market, why should they see their hard work go into the pockets of speculators and investors? Maybe the whisky used is from far older casks. Everybody knows that Sherry Casks are 10x the price of Bourbon Casks and maybe this contains old whisky from Sherry Casks, that will always have an effect on the price. The downside to this argument is somewhere along the way the actual whisky gets forgotten about. Is it actually any good, is it worth the money, will it sell out? Well that is up for you to decide, but we can guarantee that if you bring a bottle of this out in time to ring in the New Year then you will start the year off with more friends that you ended the last one with.

RRP £190 Available from specialist whisky shops, including The Whisky Exchange 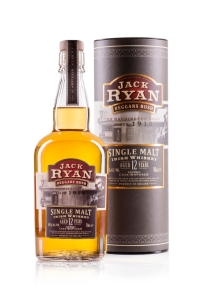 Hogmanay may be a Scottish tradition but one other country that can rival the Scots’ love of partying is the Irish. They can also rival their Gaelic cousins when it comes to whisky or whiskey as they like to call it. One such fine whiskey comes from the Ryan family. The Ryan family have been in charge of a drinking establishment in Dublin called the Beggars Bush for over 100 years and to celebrate this achievement they released their own whiskey. You can read more about Eunan Ryan and his story here. This is a fine drinking whiskey, matured in bourbon casks that the family hand picked themselves, silky, honey and smooth are just some of the descriptors that can be used for this whiskey. If you want to educate your guests then this is a fine whiskey to go for and probably something they haven’t seen before.

Staying in Ireland, and staying in Dublin, this is the last whiskey of our guide, but my no means least. It is also the only Grain whiskey on our list. The Teeling Whisky Co. are based in Dublin with the aim to revive the Independent Spirit of Dublin. The brainchild of brothers Stephen and Jack Teeling, a new distillery was opened earlier this year where they hope to prove that Irish Whiskey is every bit as good, if not better, than any other whiskies out there. An interview with Jack Teeling can be found here. This Single Grain whiskey makes our list due to it’s maturation in Californian Red Wine Casks, this gives the whiskey an intense fruitiness which blends wonderfully with the grain sprit giving a wonderful taste sensation that hooks you in. The cork on this bottle is only there for decoration purposes, once you open it, there will be nothing left to seal in. Exquisite.

No party can be called a party without 3 things, Music, Whisky and Crackers! This item on our list covers 2 out of the 3, which ain’t bad. Following on from the success of the advent calendars, Drinks by the Dram have once again pushed the envelope and realised that dice, small sewing kits and cheap plastic toys are not what everybody wants for Christmas. These crackers come with the same funky hat, and also the jokes that will leave you searching for the funny part, but they also contain one of the Drinks by the Dram collection of 3cl whiskies. What will be in yours? You won’t know until you and your partner pull it and create a bang, which results in your prize whizzing its way through the air until falling to the ground with a victorious thump. Whisky in a cracker, whatever next?

RRP £65 Available from Master of Malt

The last item on our list is the most expensive and will not be to everybody’s tastes, heck it isn’t even really a Hogmanay dram, more of a way of life. So what is it, I hear you ask? It is a made-on-request Steamer Trunk! Nope, we have no idea either, but what we do know is that you will be the talk of the town with this. The Chivas 12 Made for Gentlemen by Globe-Trotter Steamer Trunk is a modern reinterpretation of a timeless classic. Featuring the bespoke burgundy fibreboard, American white oak from oak casks and a hand engraved copper plaque made from a retired Scotch whisky stills, the steamer trunk also comes with specially created compartments for shoes, a drawer to hold up to nine watches, oak hangers to hold pristine suits and a beautifully crafted mini bar with mirrored back, perfect for serving Chivas Regal. Interested? Well you should be! An amazing piece of luggage and one that any whisky drinker would be falling over themselves to own. This retails at an eye-watering £12,0000, however proceeds of it’s sale goes to The Prince’s Trust, so you can feel good and look good. Only available at the Globe-Trotter flagship store in London and as mentioned previously for £12,000.

This concludes our Hogmanay dram ideas, we are certain that any of these drams will give you a night to remember and are perfect for ushering out the old and welcoming in the new. If you have any ideas on what would make a perfect Hogmanay Dram then let us know, we are always ready to talk about whisky.

This site uses Akismet to reduce spam. Learn how your comment data is processed.

Everybody needs a Whisky Corner in their life.